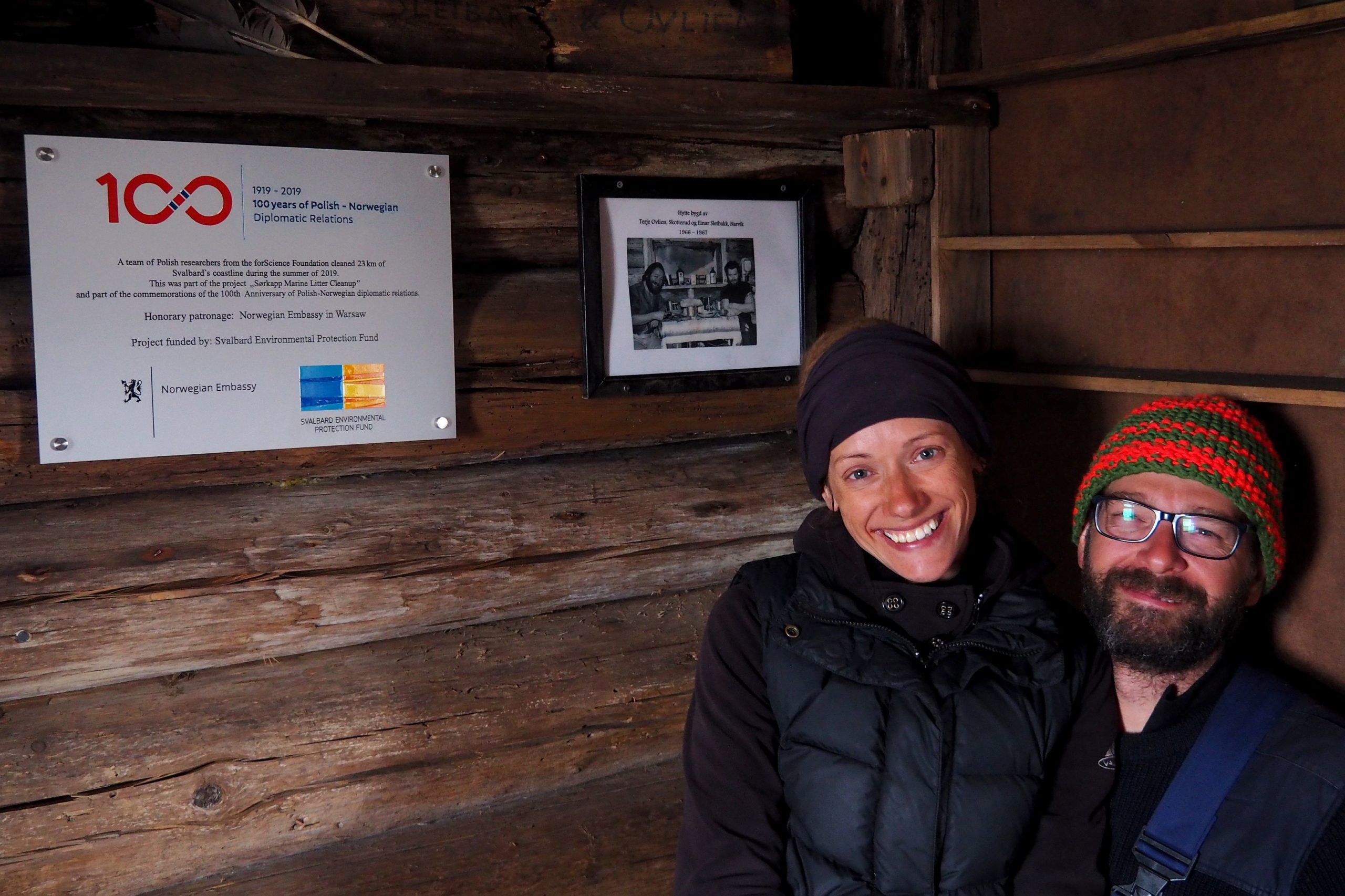 This spring, Sørkapp Marine Litter Cleanup project received the patronage of the Royal Norwegian Embassy in Poland. Despite the fact that the Embassy does not normally offer its patronage to initiatives carried out outside Polish borders, an exception was made in our case. The reason behind this exceptional treatment was the 100th anniversary of establishing diplomatic relations between Poland and Norway, which is celebrated this year. To our delight, it was Sørkapp Marine Litter Cleanup project that was selected to become part of the celebrations. The official letter which we received from the Embassy on this matter is available here.

Official logo of the centenary

To commemorate the big occasion, the Embassy commissioned a special plaque. We were asked to take it with us to Svalbard and display it inside Kapp Horn Hytte, which – with the permission of local authorities – was to serve as our base. More information about the cabin can be found here and here.

The plaque was presented to us by Norway’s Ambassador to Poland, Olav Myklebust. During the meeting, which took place on June 13, we had an opportunity to chat about the origins and assumptions of the project, our expectations and worries, and about the magnetic charm of Svalbard, which – as it turned out – Ambassador Myklebust also finds hard to resist. 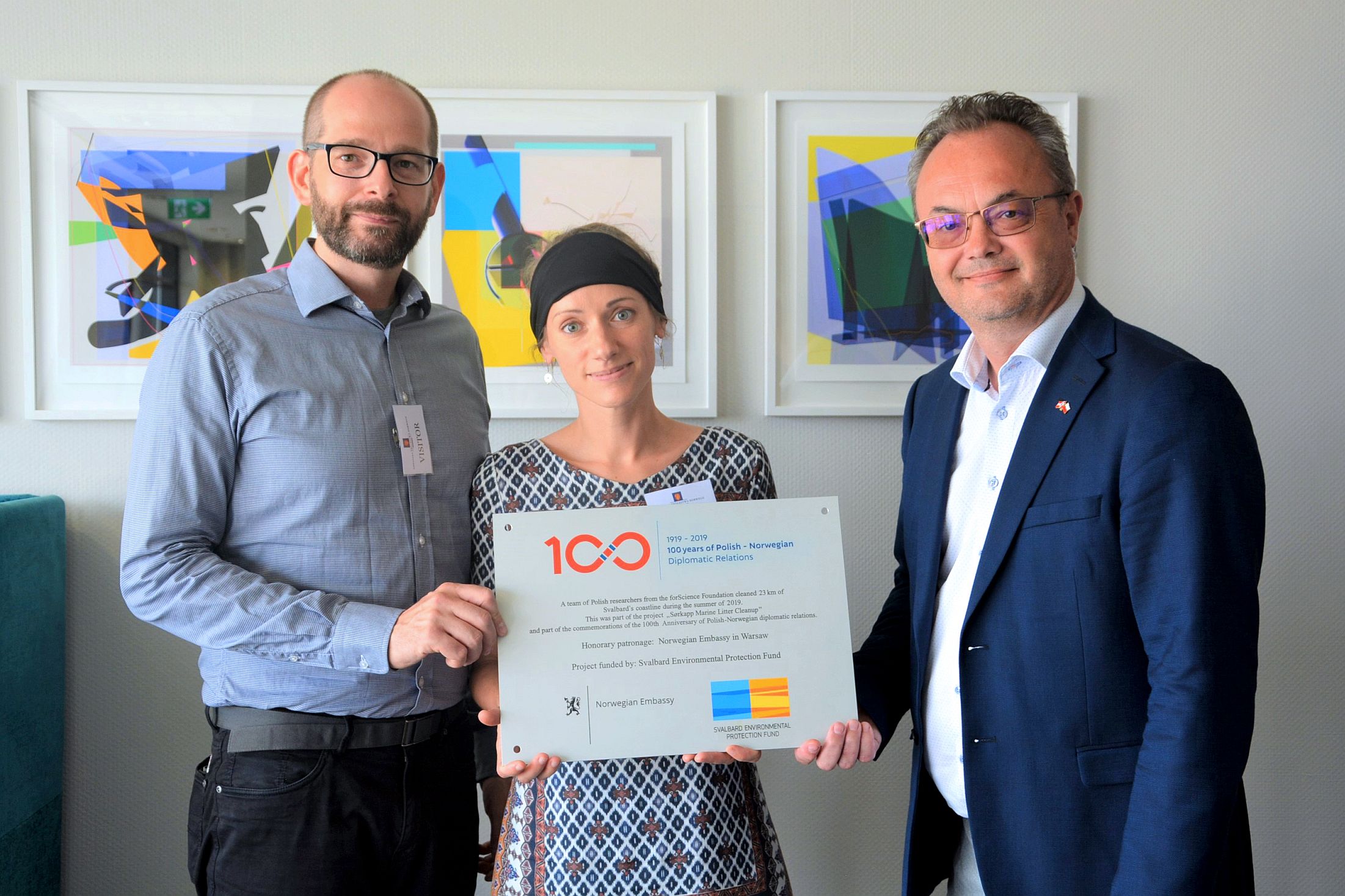 In a sudden surge of enthusiasm brought about by the very enjoyable meeting at the Norwegian Embassy in Warsaw, we sent a last-minute request for patronage to the Embassy of the Republic of Poland in Oslo, Norway. The Embassy’s response was as positive as it was immediate and a mere day later Sørkapp Marine Little Cleanup project enjoyed a double honorary patronage! A confirmation letter signed by Poland’s Ambassador to Norway, Iwona Woicka-Żuławska, states:

The ecological project executed by forScience Foundation along the coast of Spitsbergen serves as an example of broad bilateral cooperation, whose importance we wish to particularly emphasize during the currently celebrated 100 years of Polish–Norwegian diplomatic relations.

In mid-July, when this year’s round of fieldwork in Sørkappland was already drawing to a close, the commemorative plaque which we had received from Norway’s Ambassador to Poland was placed on one of the inside walls of Kapp Horn Hytte. If you’re ever lucky enough to visit the area, the plaque is likely to be the first thing to catch your eye once you have entered the cabin. Make sure, however, to inspect the photograph next to it, too. These two bearded Norwegians are Terje Ovlien from Skotterud and Einar Sletbakk from Narvik, without whom there would be no Kapp Horn Hytte and – quite possibly – no Sørkapp Marine Litter Cleanup project either. We bet neither of them expected that the cabin they had built would half a century later become a seasonal base for forScience Foundation and thus play a part in the celebrations marking the centenary of diplomatic relations between Poland and Norway! 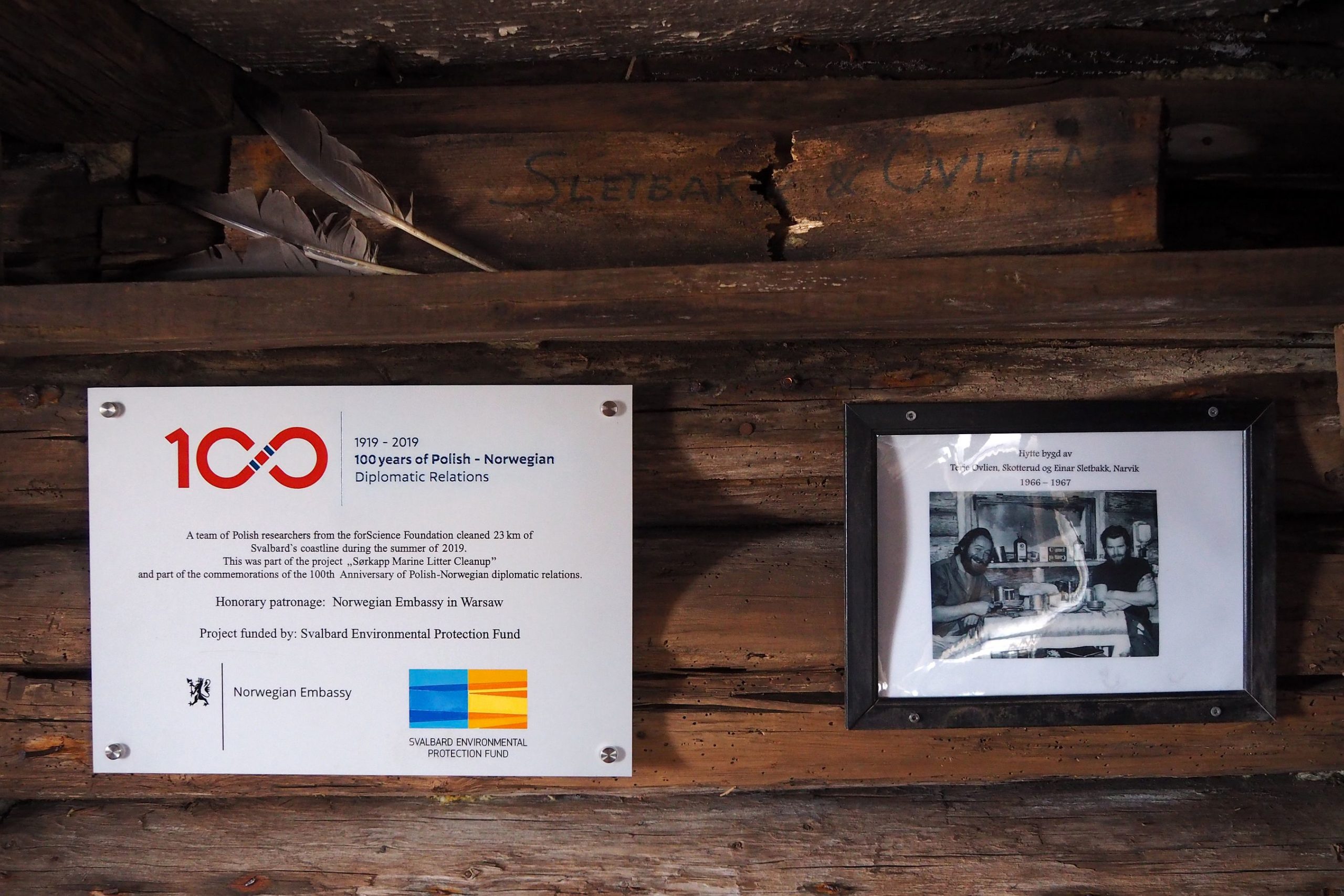 Unfortunately, notoriously grim Arctic weather forced us to revise our original plans. As a result, the engraved information about the length of the cleaned beach does not correspond with the facts. Not all is lost, however. Next year, during the second round of fieldwork, we’ll do our best to catch up!