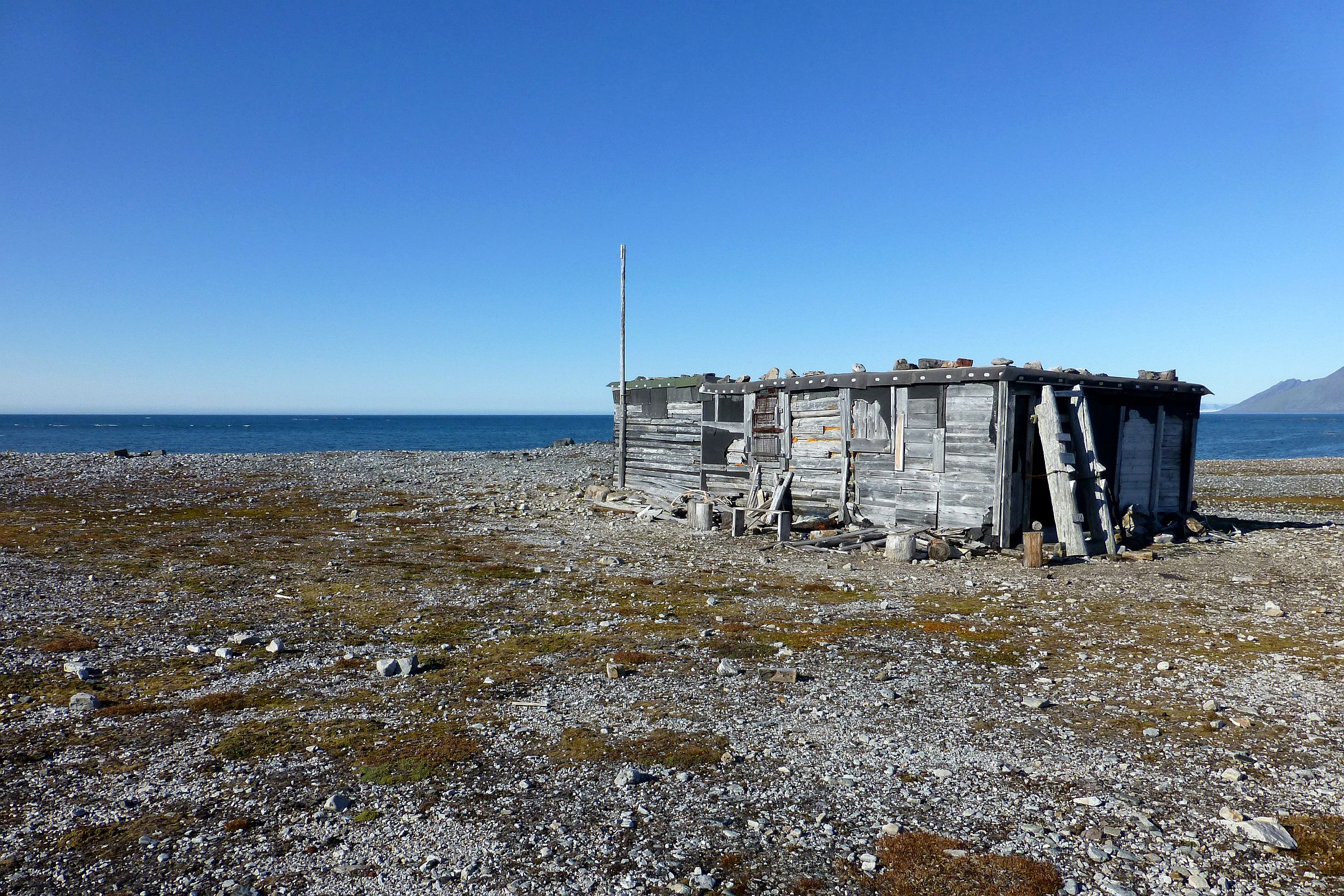 The idea to clean a stretch of Svalbard’s shoreline emerged one gloomy September afternoon in 2015, when – bored with excessive comfort of the Polish Polar Station Hornsund – we crossed the fiord to spend a few days in a rotten trapper’s cabin in Palffyodden and do some maintenance work to increase the likelihood of the cabin’s making it through the coming winter. Apart from planks, nails, saws and hammers, we brought along a cook, who demonstrated considerable skill not only in using the above-mentioned equipment, but also – as was to be expected – in cooking on a pot-bellied stove, which was enough to secure his participation in the project.

After two days of tough physical work, the state of the cabin still left a lot to be desired, so a week later we returned with a new supply of planks and nails, this time without Dominik, who had to stay on the opposite side of the fiord. When we had used up all the planks and tidied up the whole cabin (which pretty much exhausted the range of available entertainment) and a prolonged spell of bad weather prevented us from returning to the Station, we directed our attention to the sprouting project idea. As is usually the case, once we got back to Poland, the idea ended up on the shelf, where it gathered dust for two and a half years. Here you can read about what happened when we had finally dusted it off.

Today we can say for sure that the execution of Sørkapp Marine Litter Cleanup will start in June this year and continue until the end of 2020. Throughout this time we will keep you posted on where we are at in the project. We will also tell you more about the issue of marine litter polluting seas and oceans of the world. For a start, however, let us introduce the two of us and the excellent team we have managed to put together.

ADAM NAWROT has taken part in numerous scientific expeditions to Svalbard and spent two winters at the Polish Polar Station Hornsund, once as the Expedition Leader. On a daily basis, he works at the Department of Polar and Marine Research of the Institute of Geophysics, Polish Academy of Sciences, where he is responsible, among others, for the programme of environmental monitoring conducted by the Polish Polar Station Hornsund. In other words, he knows Hornsund like the back of his hand. He has considerable experience in operating watercraft on local waters and knows how to handle firearms (which should help us scare off overly curious polar bears). At this stage of the project, Adam deals mainly with logistics and paperwork.

BARBARA JÓŹWIAK has extensive outdoor experience, mainly in mountain regions. She has travelled in Siberia and Kamchatka, Swedish, Norwegian and Canadian Arctic, as well as in the Alps, the Himalaya, the Tian Shan and the Pamirs. She first visited Svalbard in 2013 and two years later spent a month at the Polish Polar Station Hornsund, trying her hand at project fieldwork. On a daily basis, Barbara works as a freelance translator, cooperating, among others, with the Institute of Geophysics PAS. In the project she handles everything that’s in English, which – for the most part – involves discussing technicalities with various institutions in Svalbard and communicating with potential scientific partners. On top of that, she’s also responsible for the Foundation’s website and Facebook profile.

DOMINIK PETELSKI is a yachtmaster and oceangoing motorboat master. He has sailed on the Barents Sea, Norwegian Sea, Greenland Sea and Baffin Bay. It wasn’t just the seas, however, that helped him gain valuable outdoor experience, but also the mountains and winter trips to the Tatras, Caucasus, Iceland and Lofoten. He has spent four winters taking care of a mountain hostel in the Beskid Mountains. Since 2011, Dominik has visited the Polish Polar Station several times. While there, he worked as a cook and – in his free time – carried out measurements for the Institute of Oceanography PAS. Just like Adam, he is at home with motorboats and firearms. At this stage of the project, he is responsible for provisions.

MONIKA PALIWODA has ample outdoor experience (gained over the years in the Alps, the Caucasus and the Norwegian Arctic) and sailing qualifications. She has sailed, among others, on the Baltic Sea, Norwegian Sea, Atlantic Ocean, Bay of Biscay and Celtic Sea. Connected with education and non-governmental organizations, she has worked on numerous local and international projects related to education and innovation. During the preparation stage of this project, Monika seeks cooperation with the media. She is also planning to write a few articles for travel and ecology magazines in order to describe our endeavours and adventures and, at the same time, boost public awareness of the growing issue of marine litter.

JOANNA NAWROT, like the rest of us, finds it difficult to stay put. She has gained outdoor experience in Chile, Tibet and during an ornithological tour around Scandinavia. She has also taken part in sea cruises on the Baltic Sea and Atlantic Ocean, and in winter kayaking trips. Her daily life revolves around computer design and photography, which is why her role in the project will be to photographically document our work and the more interesting of our finds.

JĘDRZEJ GÓRSKI does kayaking, running, mountain trekking and rock climbing. His spirit of adventure led him, among others, to Asia and North America. As a PhD student at Wrocław University of Science and Technology, he constructs measuring instruments for analysing climate changes. Moreover, he develops and tests new technical solutions as an analog astronaut at the Mars Desert Research Station in Utah. At this stage of the project, he tries to find additional funds for its execution.

So much about the team. From the next post you’ll find out more about where Palffyodden lies and why it is there, of all places, that we have decided to go.

Better late than never, or slightly cooled news from the front